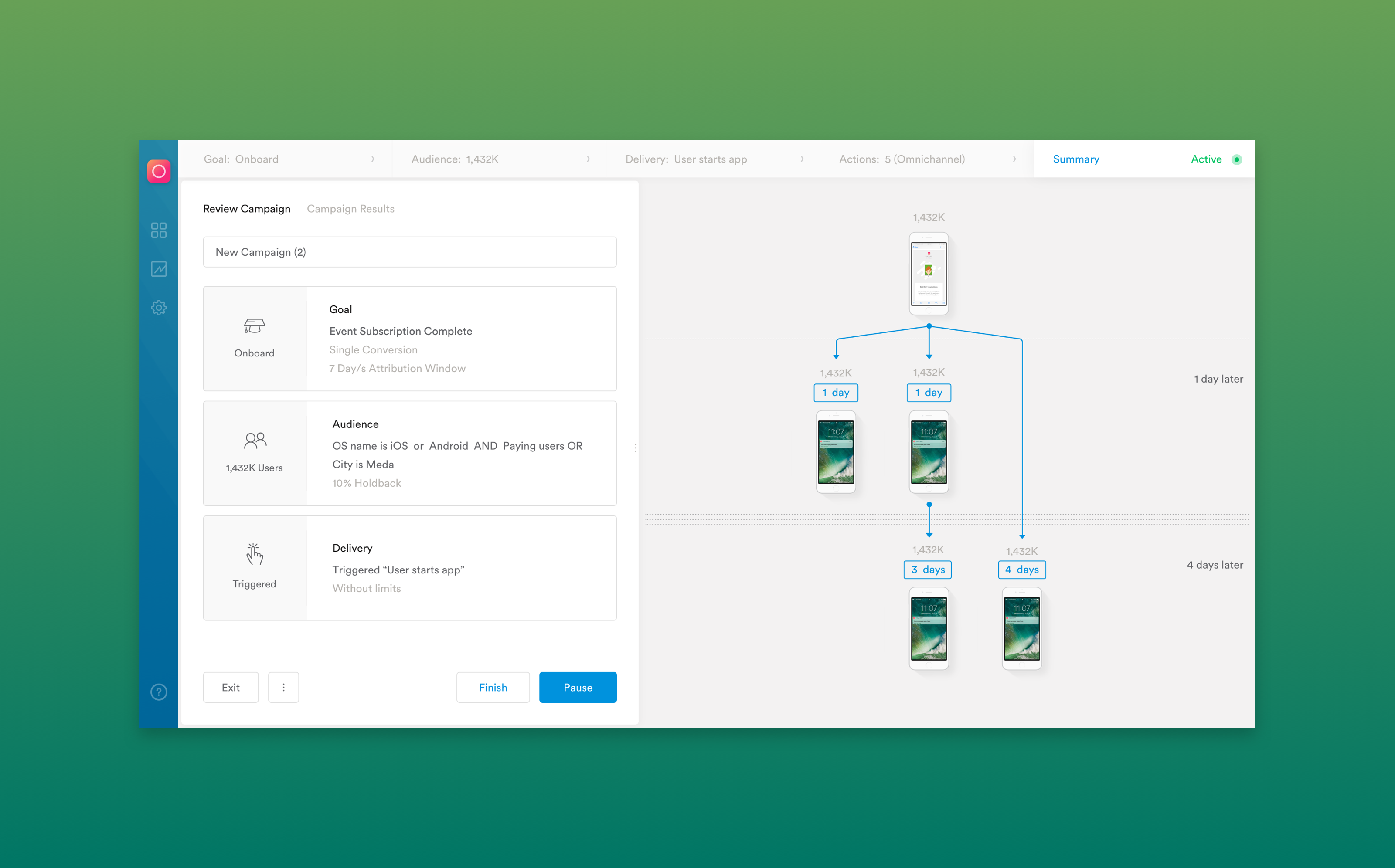 Leanplum first started out as an A/B testing company. After one of its key customers had asked for mobile marketing features, the company saw and seized the opportunity to build out a mobile marketing platform with A/B testing at its core. Our mission now was to empower brands to create meaningful relationships with their users using rich contextual data like never before.

The Design Sprint that set everything in motion

In October 2016, a group of Leanplum employees across disciplines and functions got together at an offsite to envision what the future of Leanplum would be. We were eager to build the next-generation mobile marketing platform. But what would that look like? It would be somewhere in the direction of AI-assisted, contextual, complex, and flexible cross-channel campaigns. We did a Design Sprint in order to quickly ideate, prototype, and validate that future. We came up with two powerful ideas—Campaign Composer and Command Center.

Campaign Composer was an effort to transform a product originally built for product managers and developers into the modern mobile marketer’s bread and butter. Usability for creating the most innovative and imaginative cross-channel campaigns was at the forefront. We had whiteboardings and design reviews every single day so we could explore how to push it further or break it and start over again. We arrived at a five step flow that allowed for discovery of further campaign optimizations and constantly provided feedback so users felt confident at every step. Furthermore, feedback on the right side was a visual representation of their work or information to help them validate their decision.

In hindsight, one of the wildest things we did was present to sales and customers our designs without properly managing expectations of when it would be generally available. Our testing and feedback was telling us that we were on the right path of bringing the ultimate solution to the market. The hype was so real, and we were so intoxicated by the sheer excitement and market validation that we didn’t anticipate the roadblocks soon to come. We eventually arrived at an MVP for beta not too far off schedule, but no one wanted to use it except smaller customers willing to take a risk. Later, tech debt would catch up to us and all those subsequent fires ultimately distracted us from dedicating a real effort to make it fully enterprise ready, delaying feature parity.

The paradox that is enterprise software

Campaign Composer could create the most complex campaigns with relative ease, but it didn’t quite hit the mark for super simple use cases—our mistake was thinking those would be relics of the past and that completely contextual and personalized was the future. One important realization that came too late was that our largest enterprise clients were simply not yet ready for this platform. Their internal systems and tools were archaic. Their data was everywhere. It took them months to get a simple batch and blast campaign out.

One would think that this kind of landscape was ripe for innovation. But at the heart of it, we built an airplane that could fly anywhere, while enterprise customers just wanted a bike that could cross the street. The trust wasn’t there.

Between a rock and a hard place

Campaign Composer is in a weird place. We learned so much from it and continue to learn from it. It has yet to reach full feature parity so a majority of customers are still using Classic—those users have seen hardly any updates. The customers on Campaign Composer are some of our happiest, but they’re the smaller, agile, and savvy bunch of customers. By most accounts and data, Campaign Composer is a much better user experience and we had believed that it would be compelling enough for users to make the switch. Yet, we eventually came to learn how important accomplishing specific use cases were to make customers successful as we did with Email.

Managing expectations is key, especially for trust. Complete redesigns and rewrites are really, really hard. If you’re going to end up with a legacy version and a new version coexisting, have a real migration plan and commitment to carry it through.